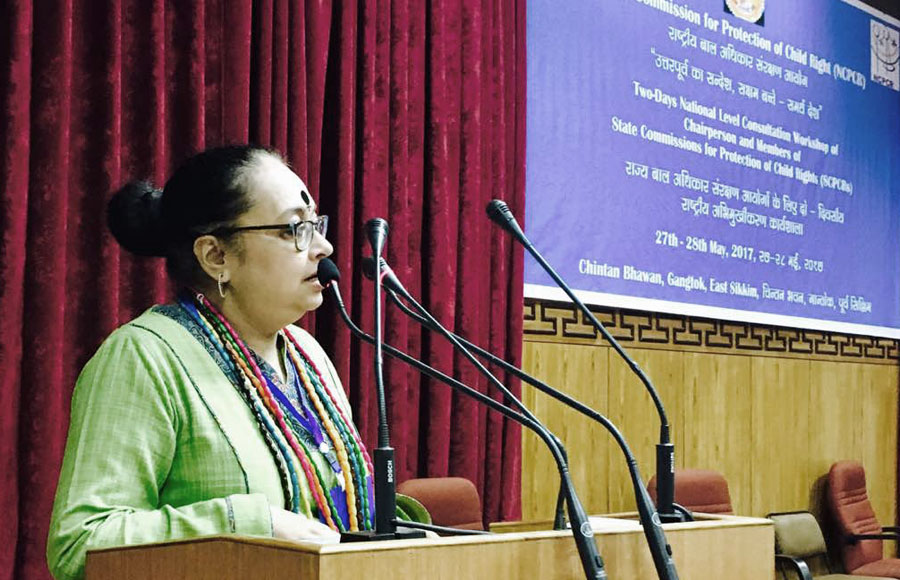 In the past one year the Commission has seen many transitions: the very capable former chairperson made way for a new one. The commission has many new faces in its membership as also in its staff members. There are new initiatives being taken along with the existing ones. The Commission has started holding regular hearings in its premises, and has gone in for direct interventions where speed is needed to ensure justice. The members and the staff are working tirelessly to fulfil the commitment that the Commission is committed to.

The Commission has voiced concern over the deplorable condition of the Child Care Institutions (CCI) and tried to improve it through inspection visits on a continuous basis and submission of critical review reports with necessary recommendations to the Government of West Bengal.In numerous cases, the Commission took suo motu cognizance based on various media reports and took action on POCSO, RTE and JJ Cases.

The Commission has started acquiring resources from CSR. A number of corporate houses have already started providing support to the Commission to make the various child protection programmes a success. It has organized a ‘State Level Consultation Workshop on POCSO Act, 2012 & Child Rights and Child Trafficking in Tea Gardens ’in Darjeeling, supported by NCPCR. This is the first time where eight Judicial Magistrates and one Session Judge actively participated in such Consultation. The Commission has brought out ‘Hullor’, the first ever quarterly children's magazine written by the residents of CCI across West Bengal.

While media ignites awareness in us by providing information and knowledge and plays a constructive role for the society by raising social issues but all newspapers are not equally responsible in presenting facts and information. Sometimes either they sensationalize or trivialise the matter which creates hindrances in getting justice to the survivors. In such type of cases, the Commission has played a very proactive role by serving notices to the Media Houses and they have taken the necessary actions. So, the commission has decided to give ‘Shishushree’ award for sensitive, responsible and responsive media reporting on children.

The Commission has prepared 4 spots on the issues of child marriage, child trafficking, child labour and RTE to raise awareness and sensitize the common mass through telecasting in electronic media and also as hoardings in significant places in the city.

The Commission had decided that from 2016 onwards the Poush Mela at Shantiniketan would be celebrated as the “Child Friendly and Child Labour free fair”. This was for the first time in the state where a fair or festival has been recognised as a Child Labour Free Fair.

The Commission has taken initiative to work with the WB syllabus committee for inclusion of gender equality, transgender and adoption in the school syllabus as until and unless children are made aware of gender sensitivity, it would never be possible to prevent child abuse.

The Commission has hired a professional counsellor for schools to support a safe learning environment and work to safeguard the human rights of all members of the school community. It also supported the CCIs by providing trained counsellor for creating a confidential & positive environment for children to ventilate their feelings & experiences.

The famous transgender footballer ‘Bony’ has been appointed by the Commission as a ‘Coach’ for the children of CCIs.

With the initiative and efforts of WBCPCR, the internationally famous fashion designer Ms Bibi Russel has kindly consented to train the residents of SMM Liluah Home to develop their skill for livelihood.

The Commission coordinates on a regular basis with the District Magistrates, District Child Protection Units and Child Welfare Committees across all districts of West Bengal for a strong and effective monitoring to prevent the violations of child rights in the State of West Bengal.

The Commission is also giving importance on interstate collaboration to learn ‘best practices’ for smooth and more effective functioning.

The Commission has played a significant role in intervention and investigation process in collaboration with the CID in matters related to child trafficking.

As the Commission acts as the Nodal Agency of RTE in West Bengal, so it has started to work with civil society groups, academia, government officials, legislators, members of the Judiciary and all other stakeholders to build a movement to ensure that every child of this state gets the opportunity to read in school in a child friendly environment and enabled to get at least 8 years of quality education.

Last but not the least, the Commission would like to express its heartfelt gratitude to all State and District level Officials , Law Enforcement Agencies, Judiciaries and Civil Society Organisations for their active support and cooperation throughout the year.

All items on this website are copyright West Bengal Commission for Protection of Child Rights 2023, all rights reserved.
Developed By Festoon Media and this page is maintained by Kuldeep Polley