You are here: Home / Success Stories

An innovative initiative by WBCPCR was to get hold of the eminent fashion designer from Dhaka, Bangladesh, Ms. Bibi Russell. 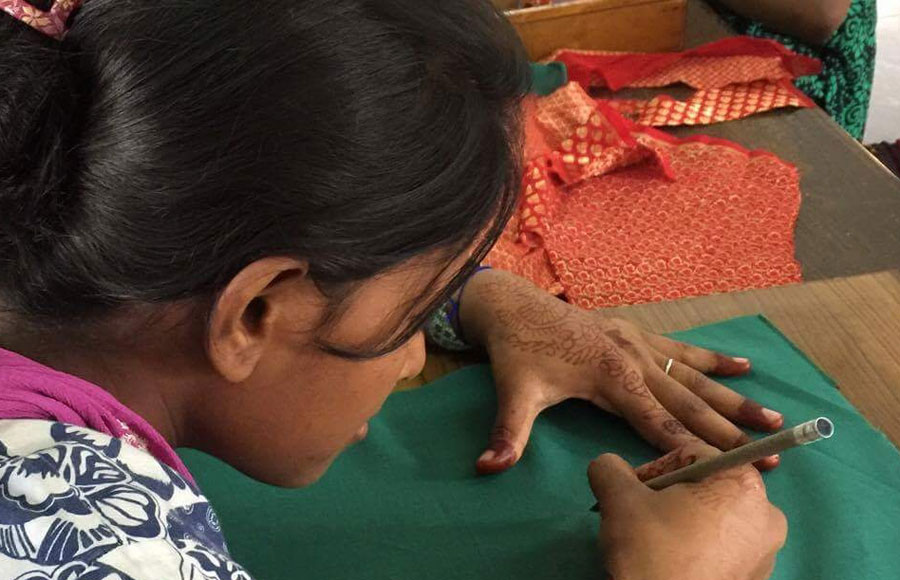 Ms. Russell has graduated from London College of Fashion and had worked for various organizations and contributed towards the social development cause of the state. The entrepreneur owns her fashion house Bibi Productions’’, Fashion for Development and had employed thousands of weavers from the rural areas.

She had also worked with acid attack survivors and HIV Aids patients for their livelihood and had been awarded as ‘Designer for Development’ and ‘Artist for Peace’ by UNESCO as well as ‘United Nations Associations of Spain’ for such noble initiatives. During her visit to India she had already made up her mind to contribute in any which way possible and on West Bengal State Commission for Protection of Child Right’s approach to her to visit and revamp the Liluah home loom process, she graciously agreed to it as her part of social commitment.

This initiative is taken to create a life support skills for the residents and to revamp the defunct looms at Liluah home. WBCPCR had made many visit to the home and have even reported and recommended to the Department of Women & Child and Social Welfare on the measures to be taken for its proper functioning. Weavers from Phulia, district Nadia were also brought to make the existing 11 looms functional. As the next step to this Ms. Bibi Russell was contacted to give shape to this initiative. This would be a six (6) months training project in batches at Liluah home, with four(4) looms and six (6) sewing machines presently functional.

A variety of textile, sari, cloth line, accessories as well as range of recycled products to be produced and displayed.

Suhina Khatun is a young girl of 16 years who resided in a village of North 24 Parganas. She used to go to school, but her parents arranged her marriage without her consent to shove off their responsibility. She shared with her friends, but they could not stop it. Then she informed the Headmaster of her school. He tried to persuade her family members, but they did not pay heed to him. Then he approached the police of the local p.s. The parents forced to give a declaration to the police that they would not get her married. But, within a couple of days, they again arranged her marriage.

In the month of November, 2016 WBSCPCR had got a complaint from Seema and Sabina (name withheld) two young girls of minority group who belonged to marginalised community in Barasat, North 24 parganas.. Their private pictures were taken by a person and they were blackmailed. Out of sheer humiliation and fear, they had to confine themselves within their home.

As soon as the Commission got the complaint, it successfully intervened and physically inspected as a case of violation of child rights. It took steps immediately. The accused who allegedly blackmailing the poor girls was arrested .The Commission arranged for the police protection of the survivors. The girls have been able to appear for their examination also. The Commission is still doing the follow up with these girls and their family members .

Jalal Ahmed (name withheld) - a boy of class VI who belonged to a socio-economically poor family was beaten and thrown out of a school in Gardenreach area by the teachers on the ground of being unruly in school. He lost his mother in his early childhood.

The boy has been able to appear for the final examination. He passed and promoted to next class with satisfactory marks. His father has mentioned that a positive change is being observed within him after going through a few sessions of counselling. It has also been decided that the trained counsellor will take further sessions with the children especially with the teachers of the school to make the environment child friendly.

Mumtaj Khatun (name withheld) – a girl of 15 years was raped in a house under construction in Topsia in 2016.

The news was published in the Times of India. Soon, the Commission has taken suo moto cognizance. The Chairperson contacted the Commissioner of police and asked for an enquiry report. The DCDD took over the case. The Investigating Officer contacted the Commission. The survivor was admitted to Chittoranjan Hospital for treatment. The Chairperson and the Members visited her. By the initiative of the Commission, the accused person was arrested under the POCSO Act. Her father was a drunkard and she used to stay with her grandmother and uncle. After the incident, she had to leave her school also.

All items on this website are copyright West Bengal Commission for Protection of Child Rights 2023, all rights reserved.
Developed By Festoon Media and this page is maintained by Kuldeep Polley